A Long Strange Trip: The Inside History of the Grateful Dead (2002) 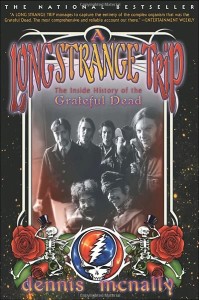 RAISING THE DEAD Though he’s a longtime Deadhead, McNally doesn’t gloss over the tough stuff

Most people who love good music hate the Grateful Dead. They’re wrong, of course, but it isn’t hard to see their point. A flawed band even at its best, the Dead was capable of maddening laziness and ineptitude. Then there were the hardcore fans, a certain highly visible segment of whom formed an irksomely conformist cult composed mostly of obsessives and dysfunctionals.

But as many folks with open ears and an affection for eccentricity know, the Dead frequently reached astonishing musical peaks. Jerry Garcia was — avert your eyes, music snobs — rock’s greatest guitar improviser, and the band wrote innumerable songs of great beauty and joy.

To Dennis McNally’s credit, A Long Strange Trip: The Inside History of the Grateful Dead manages to capture the entirety of the complex organism that was the Grateful Dead. A long-time Deadhead and the group’s publicist since the ’80s, McNally is a band-trusted insider who is, therefore, a somewhat untrustworthy reporter. Fortunately, he doesn’t dodge the tough stuff. The band — and its extended cast of family, friends, and crew members — comes across as pretty erratic: smart, curious, generous, witty, paranoid, jealous, petty, and ill-tempered. ”It amazed everybody,” McNally quotes ex-keyboardist Tom Constanten saying, ”that anything happened, because there was so much sniping going on.”

McNally also details the Dead’s horrifyingly prodigious drug and alcohol intake, which early on involved a lot of LSD and later led some to cocaine and heroin. (Three members died from substance abuse or drug-intensified illnesses.) And unlike most sympathetic chroniclers of the Dead phenomenon, McNally resists romanticizing the caravan of partiers more attracted to the scene than the songs. ”Dead Heads were not paragons,” he writes. ”An…annoying example of obliviousness came with every performance of ‘Black Muddy River.’ Night after night, Garcia would depict the agonizing ‘dark night of the soul’ as he sang, ‘When it seems like the night will last forever,’ and some Dead Heads would choose to cheer it as a reference to an unending party.”

McNally’s greatest achievement is untangling the Dead’s knotty history. The band — then known as the Warlocks — played its first gig in 1965 and soon adopted the moniker the Grateful Dead (good thing they didn’t go with Garcia’s suggestion, the Mythical Ethical Icicle Tricycle). They quickly developed into a sort of house band for the hippie LSD parties known as acid tests.

At this point ”Trip” briefly loses its way. McNally devotes far too much space to pre-Summer of Love San Francisco, cranking out page after page about the goofy antics of scenesters both bored and stoned. This is well-trodden territory (see Tom Wolfe’s ”The Electric Kool-Aid Acid Test”), and most of these anecdotes lack snap, filtered as they are through memories made hazy by time and LSD. No doubt the Dead and their acid-scrambled friends had some giggles, but nearly 40 years later it’s hard to share in the hilarity. Jefferson Airplane’s light-show operator projected a film of fire onto the Dead’s house, to pick one example, and a cohort shouted, ”Fire!” ”The occupants of 710 came flying onto Ashbury Street,” McNally writes, ”got the joke, and enjoyed themselves.” Not so the reader. This is a crucial period in the band’s development, of course, but the Dead’s musical output from this era is, for the most part, not the stuff beloved by fans, and the book is more than half gone before it reaches 1970.

Over the next decade, the Dead would mature as songwriters and improvisers. They became the first rock band signed by Warner Bros.; released 13 studio albums; and played at both Woodstock and the pyramids. In the ’80s they even scored a top 10 hit with ”Touch of Grey.” (Garcia’s response? ”I am appalled.”) In 1995, Garcia died, and the Dead stopped touring. His descent into drugs and diabetes is profoundly sad, and unsparingly chronicled.A lot of this will be old hat to serious fans, but ”Trip” is the most comprehensive and reliable account out there, and it’s nice to have it all in simple English without the dippiness that often mars Dead-related writing (one Garcia bio actually attached his astrological chart as an appendix). Like the Dead, ”Trip” is imperfect, but McNally has documented this odd corner of the rock world with a lot of love and no less insight.