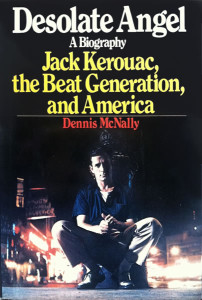 If you have no idea of your roots, your past, it’s hard to see where you’re going. So in 1972, still feeling part of the ‘60s, I looked back to the ‘50s and saw the most interesting part of it – Jack Kerouac and the Beat Generation. Seven years later and some wonderful research later, I (with a little help from Random House) published Desolate Angel. I’m brassy enough to say I think it stands up.  Here’s a chunk from where I compare the lives and work of Jack, Jackson Pollock the great abstract-expressionist painter, and the giant of bop saxophone, Charley Parker. Good stuff.

An excerpt from
Desolate Angel: Jack Kerouac, The Beat Generation, And America

Kerouac had reached a state in which his writing was very nearly a biological act, an experience of sensorium functioning, a meditation that operated through both the conscious and subconscious levels but was controlled by neither; as friend Michael McClure later wrote, he was

…an athlete
of sense
modalities
and clarities
and their inter-
combinations.

Significantly, he was not alone. At roughly the same time and place and in response to the same stimuli – a world at once accelerating and constricting – the painter Jackson Pollock and the musician Charlie Parker had accomplished similar revolutions in their own art forms. The direct parallels of their lives were astonishing. All three men were working-class sons of matrifocal families who refused to “adjust” to the conformist society of mid-century or the accepted styles of their disciplines, and for their efforts were labeled psychopaths and falsely associated with violence. Each ignored the critical authorities in their field and stood emotionally naked before their audiences, spewing words, notes, or paintdrops that were like the fiery rain of a volcano: The rain captured the passing moment in a luminous veil of particulars that depicted the universal as an expression of the artist’s own self.

Jack’s link with Charles “Bird” Parker was obvious, since he consciously modeled his writing after Parker’s magnificent music. As technically sophisticated as his tunes like “Ornithology” or “Groovin’ High” were, Bird played with the raw energy of a high-power line, and it was that stabbing electricity that Jack had attempted to put into On the Road, that mortal sense that the candle must burn furiously, else the times will surely snuff it out. Parker blew from the roots of Afro-American music, from rhythm, and from rhythm, speed, improvising an ever more fluid melody with faster and faster notes until the front row of his audience was awash in the sounds that expressed what a later critic called his “naked passion and hurtling, uninhibited romanticism.”

The tunes themselves were spontaneous improvisations on old pop tunes, worn fragments plucked from the commercial popular culture and reenergized. Parker’s art had affinity for Jack’s not only in their transmutation of the old culture, but in their concern for the human voice and breath. When Bird blew he sang, the man and his horn were one, the reed and keys and chamber of his saxophone only an extension – like a typewriter – of his voice and mind, sounding out a style that was like speech in its inflection and phrasing. Listening to Bird – and he did so constantly – Jack felt myriad connections of subject, style, and approach, and tried to reflect that aural perfection in his own prose.

Privately, Bird resembled Neal, for he was surely one of the few drug addicts in history who retained an insatiable appetite for sex, food, and drink. Spontaneity was Bird’s conscious goal, as well, for America was a “down trip, man,” and he wanted to break the psychic bonds both for himself as an individual, and because “the style was not a style, but the man himself,” for his art. Hurtling deep out of consciousness came a deluge of sounds – human sounds – that he used to try to crack America apart.

The third member of this creative trio was the rogue king of American painting, Jackson Pollock. Shortly before Pollock made his breakthrough to “drip” painting, which involved resting the canvas on the floor and the use of a hardened brush held just above the canvas to spatter the paint, he put into note form the general idea of what he was attempting:

Technic is the result of a need—
new needs demand new technics———-
total control—-denial of
the accident————
states of order——
organic intensity———
energy and motion
made visible——————
memories arrested in space,
human needs and motives——–
acceptance—–

Though the visual arts were never one of Jack’s major preoccupations, he recognized Pollock as an “artist of genius” in an article written several years later; had he discovered these notes in 1952, he would have recognized a close brother who shared a virtually identical aesthetic. Pollock was another artist who wanted to stand in his work totally naked and confessional, romantically expressing his self and, as the painter put it in a later note, the “Experience of our age in terms of painting—not an illustration of—(but the equivalent.)” Like Jack he sought not outward form but a way to explore his emotional and sensual universe; “deep form,” as Jack had once put it. His wife, the painter Lee Krassner, wrote that “He sensed rhythm rather than order.” The canvases, the records, the growing stack of manuscript pages were merely captured moments that revealed a process, a rendering of an artistic consciousness spontaneously at work.

Pollock too had recoiled from the new order defined by the war – or for him, by Picasso’s “Guernica”—and conceived of spontaneous approaches that accepted “accident” as part of the whole and organically depicted energy, rhythm, and motion, “memories arrested in space.” Like Jack he was a shy man who often hid behind alcohol, appeared at the most proper occasions in the most bedraggled dress, said of jazz that it was “the only creative thing happening in this century,” and was essentially a sensuous Puritan fascinated by the perverse.

All three of their approaches were as much of the senses as of the mind, and each performed with a savage physical intensity. Pollock spoke of being “in the painting,” and Jack and Bird sometimes lost ten pounds after a spectacular night of creation. All three were labeled undisciplined, explosive; it seemed to the critical mentality that their stormy spontaneity was somehow too easy. Each artist had concluded that in the limbo of war and Cold War, only the most risky commitment to personal creativity and intuition could allow them to transcend the times. “Mind is shapely,” Allen had said – and spontaneous words or notes or paintdrops could become great art when twenty years of experience shortened the arc separating mind and medium to nothingness.

So Pollock stood at the center of the canvas dappling himself down; Bird blew high, higher into the smoky night; and Jack wrote on. At a time of hydrogen bombs, missiles, and biological warfare, their models were not scientists but sorcerers, their approach not intellectual but sensual, their goals aesthetic and religious. Those who sank deeply enough into the vortex of “Groovin’ High” or “Blue Poles” or Visions of Cody found themselves finally in awareness of an infinite universe, joyously wordless and silent.

(Notes: “an athlete of..” Unpublished poem by Michael McClure. [It should be noted that Kenneth Rexroth linked Beat with Parker and Pollock in “Disengagement: The Art of the Beat Generation.” The idea had occurred to me well before I saw this essay, and my development of it is radically different.] Charlie Parker: Frank Kofsky, Black Nationalism, pp 15-43; Ross Russell, Bird Lives, passim; Interview with Max Roach. “naked passions…romanticism”: Kofsky, p. 30. “the style was not…”: Russell, p. 182. 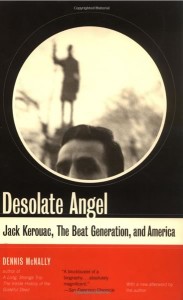 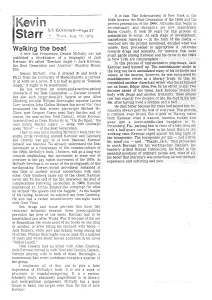