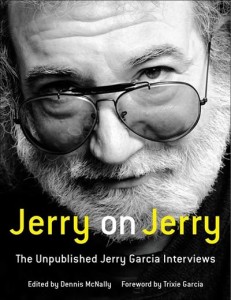 Jerry Garcia was the most remarkable mind and personality that I (and a lot of other people) ever encountered – the most curious, the most articulate, the most charismatic. Talking with him was about as much fun as I could stand. I got to do that quite a lot, and I took along a tape recorder, so in November you’ll be able to listen in or read the transcript. Would you like to hear how he created a solo?

My first encounter with Jerry

I first got a chance to talk with Jerry Garcia in 1973, when I was working on my doctoral dissertation, a biography of Jack Kerouac, and had connected with a reporter who’d written about the Beat Generation, Al Aronowitz. Al had done a 10-part series about them for the New York Post in 1960, then tried to get a book out of his research but had never been able to finish it. When I showed up he thought I could help him get it published, and one new element would be an interview about Neal Cassady with Neal and Al’s good friend, Jerry.

So after an Old and in the Way show at the Capitol Theatre in Passaic on June 6th, 1973, we adjourned to Jerry’s room at the Gramercy Park Hotel and had an excellent conversation about Neal. It didn’t much help Al – he never was able to get his Beat book published – but it certainly further encouraged my interest in the Dead, so when I published the Kerouac book (Desolate Angel) in 1979, I wanted to work on the Dead.

From Kerouac to the Grateful Dead

There’s lots more detail elsewhere on this site (you can start with the personal biography, Me and the Music Biz), but suffice it to say that in 1980 Jerry suggested I write a biography of the Grateful Dead. Which meant lots more talks with Jerry. Eventually, my book,  A Long Strange Trip/The Inside History of the Grateful Dead came out in 2002.

Now the talks will be published in November

Afterward I put the five tapes I could locate (the 1973, two in 1984, and two in 1986) – there are some from 1981 and 1982 missing – in the U.C. Santa Cruz Grateful Dead archives. Recently, Jerry’s Estate – mainly his daughters, led by Trixie – made a deal with Hachette Publishing to release those interviews, and hired me to edit them into coherent order.

It’s been a pleasure. These were conversations, not interrogations, and because Jerry had a genuine love of trading stories, the subjects tended to veer off into side-tangents that were absolutely fascinating…but not always material that fit into the story line of the Grateful Dead. So there was fabulous stuff – Jerry talking about community, or how he planned (or didn’t, exactly) his solos, or artists (musical as well as visual) that he loved – that didn’t make it into the book.

Which makes Jerry on Jerry a must-read (and listen-to; there will be an audio edition, too) book for anyone who finds Jerry as interesting as I do.

Now that it’s out, let me add that it’s even better than I dreamed it would be.  Trixie, Annabelle, and Mountain Girl dug up some great family snapshots and smaller pieces of Jerry’s art and added that to the transcripts in the print book, and it’s not only fascinating but beautiful.  And the audio book (which is to say, the original tapes – people keep thinking audio books means someone reading other words, but other than me reading my introductions, this is Jerry talking) … well what the hell, it’s Jerry talking, and you know you want to hear that.